According to the ASPCA, 44% of all households in the United States have a dog, and 35% have a cat.

According to the ASPCA, 44% of all households in the United States have a dog, and 35% have a cat. Scientists estimate that our furry friends began living among our earliest ancestors 18,000 to 32,000 years ago. In fact, the wild relatives from which our docile pets can be traced back to still roam the planet today. While our dogs and cats each have their own unique personalities, the transformation from vicious predator to cuddly companion has not shaken some of the instincts ingrained during domestication. Learn about the common behaviors and traits our pets have inherited, and how you can satisfy these needs through playtime.

The History and Domestication of Dogs and Cats

Experts believe that dogs were the first animals to be domesticated more than 15,000 years ago, and that all breeds originate from the small, South Asian wolf. Dogs became man’s best friend while humans were still hunter-gatherers following the migration patterns of herds. Early canines were drawn to camps by the luring smell of food, and followed to scavenge left over scraps. Humans quickly realized the protective nature of wolves (as they would bark and growl whenever predators were near) and began to feed them willingly. Our two species became forever bonded because of fierce loyalty and trust. The wolves eventually changed, their temperament gaining a docile disposition, becoming less fearful. Their paws, teeth and bodies shrank; they learned to recognize the expressions and tonality of humans. Wolves turned into dogs. While dogs have been domesticated for a very long time, they have undergone even more changes. Humans have used selective breeding techniques to create new breeds with specific, desired qualities.

Cats were first domesticated in the Near East close to 10,000 years ago. All housecats in the world today can be traced back to a single ancestor, the African wildcat. Cats are unique because they seemingly domesticated themselves without human intervention. When humans stopped following herds to make more permanent settlements, they began to farm and harvest crops. Grains attracted rodents which attracted cats. Humans appreciated the prowess of the felines and their aid in controlling mice and rat populations which in turn salvaged food. Cats quickly became desirable, causing humans to protect and feed them. Cats are most famous for their role in ancient Egyptian culture where they held high esteem and were represented by several feline goddesses, the most celebrated being Bastet. Egyptian priests often maintained large catteries and placed mummified cats in luxurious pyramid chambers.

Cats have become a domesticated companion animal without changing much from an evolutionary perspective. Housecats look similar to their wildcat counterparts. The intention with dogs was to perform certain tasks, which is why there is greater diversification in recognized breeds today.

As pet owners, most of us are aware of the importance in giving our dogs and cats plenty of physical and mental exercise. Safely engaging in activities that allow their natural, predatory instincts to flourish will help focus tendencies like stalking, chasing, grabbing and hunting into positive reward-based play time.

Dogs
Toys assist in fulfilling a dog’s emotional and physical needs. Although most dogs today are kept as companion animals, they still require tasks in the absence of a ‘job,’ and they will look for things to do to occupy their time and stimulate their needs. To prevent your dog from becoming bored and destructive, provide them with appropriate toys.

Cats
Cats, especially those who live strictly indoors, need stimulation to break the boredom. Exploring, exercising and hunting are several natural behaviors that enrich their environment. Through play you can improve your cat’s well-being and tap into his innate desires.
While dogs accompany their parents on many adventures outside the home, cats typically do not. Hartz understands the importance of play in your cat’s life and strives to create interactive and innovative toys to engage cats at home. We’ve extensively researched and identified 3 primary play patterns:

How to Tell if Your Dog has Fleas

The Three Most Common Places Fleas Are Found

How to Treat Your Dog for Intestinal Parasites

Choosing the Right Brush for Your Dog

A Safe, Soft Place: Why Your Dog Needs a Dog Bed

Flea-Related Illnesses that Affect Your Dog 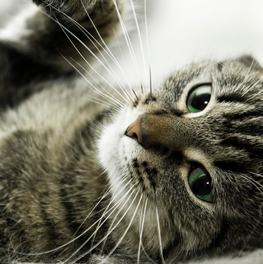 Games to Play with Your Cat Choosing Toys for Your Cat Dog Games: Teach Your Dog the Right Way to Play