Does your cat scratch furniture, bite the hand that feeds and pets, or mark their territory by spraying urine indoors? 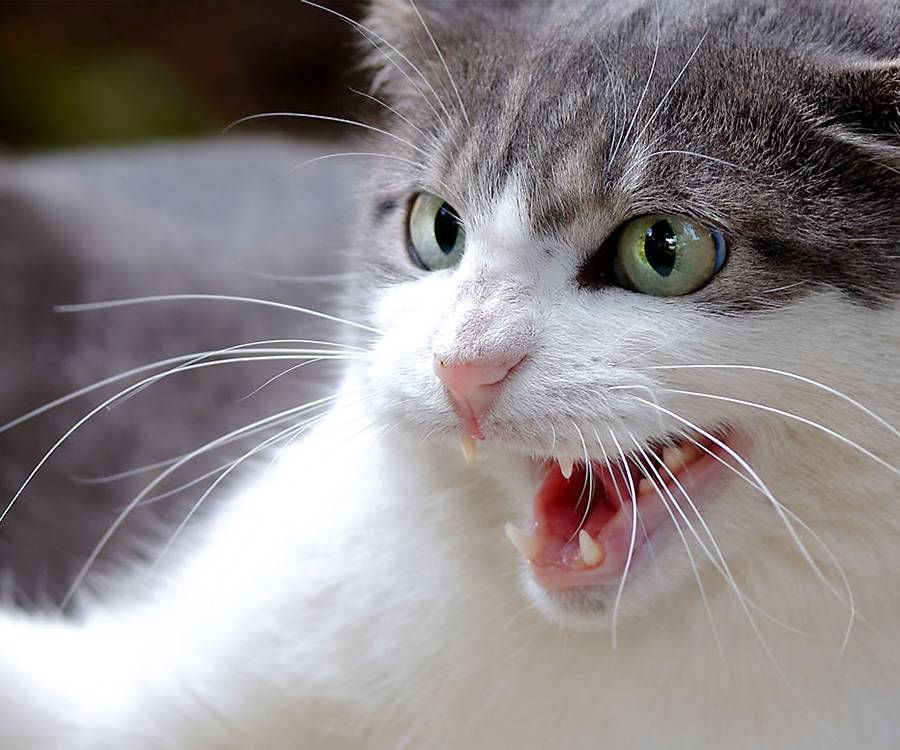 Hissing can be seen as aggressive cat behavior, but it may be due to anxiety.

As a cat parent, you know that kitty companions play by their own set of rules and are less likely to follow commands than their canine counterparts. Find out how to correct common cat behavior problems by using modification techniques to achieve improved etiquette.

Naughty cats often find themselves surrendered to shelters or abandoned outside to fend for themselves. In reality, most cats aren’t being spiteful or intentionally destructive. Instead, they are trying to cope with their environment as well as any anxiety or insecurities they may be feeling. Before assuming your cat’s undesirable antics are strictly behavioral, always visit your veterinarian to ensure no underlying health issues (which will not improve without medical attention) are the root cause.

Cat Aggression Towards People or Other Pets

Cats can bite and scratch, inflicting painful and easily infected lacerations on both people and other family pets. Here are some of the reasons why cats attack, and a few tips on how to correct them.

While it’s true cats spend up to 80% of their day sleeping, when they are awake, they can have excess energy that needs to be entertained. To cats, play is practice for real life. If your cat pounces or attacks you while you’re moving about, they may be honing their hunting skills – which is normal, instinctive behavior.

Aside from interacting with your cat while home, be sure to leave plenty of toys that cover your cat’s unique play style (swatting, batting, hunting, exploring). Introduce new toys regularly and rotate them every few days to keep play time fresh and interesting. This will also encourage your cat to pursue appropriate “prey” items.

If your cat is feeling upset or scared, they may lash out at you if interrupted. The intention is not to hurt you, but to release a build-up of energy. Be aware of the likelihood of this happening before you approach or touch your cat. If you need to move your cat to a quieter place to calm down, use a towel to wrap them in order to avoid being bitten or scratched.

Fearful cats will often attack as a defense mechanism when they can’t escape or have nowhere to hide. If you think your cat will become nervous of a new environment, guest or other change, try slowly introducing him to the situation that induces fear. This process needs to be done very gradually. Extremely anxious cats may benefit from veterinary medication, too.

Cats are highly sensitive creatures, and it may be that there is too much stimulation for them to take. This relates to cats that attack when being petted. An underlying pain issue or bad memory could trigger a cat to react aggressively when touched in certain areas. Take note of your cat’s reactions and learn to read his body language to understand the signs which indicate whether he is happy receiving affection or upset. 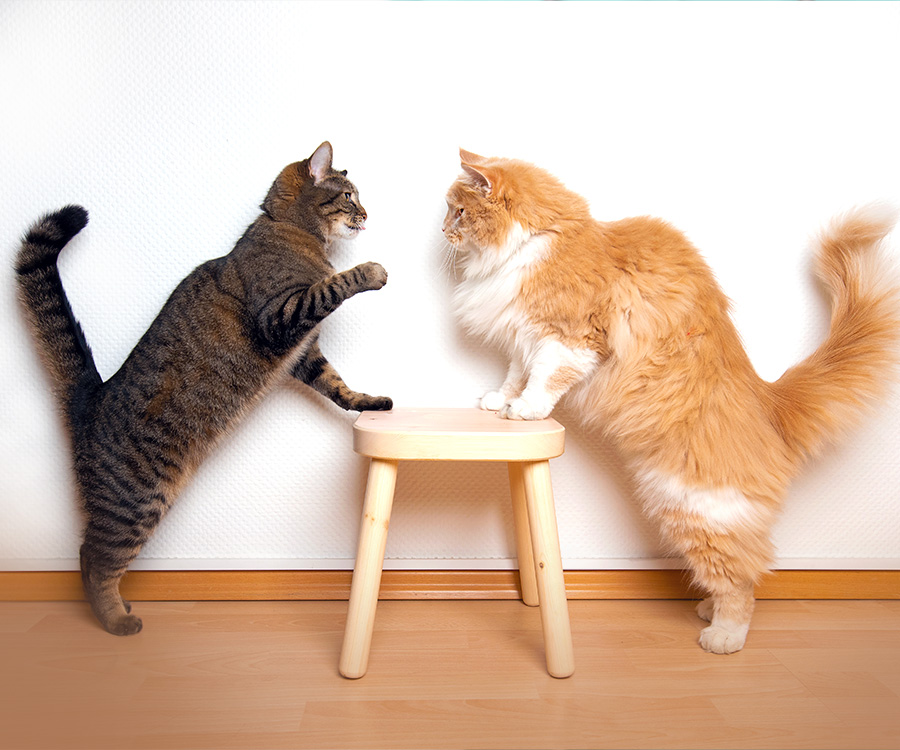 Slowly introduce or reintroduce cats to each other. Using pheromones may help reduce tension between felines.

While it's true cats are social animals, sometimes we pressure them to make friends by adding another feline to the mix without properly introducing them. The more time cats are given to warm up to one another, the better. Once a cat decides it doesn’t like another pal you’ve chosen, it isn’t easy to force them to get along. If you’ve recently brought home another cat, or plan to, keep them separated and introduce or reintroduce them to each other very slowly. Using tools like pheromones can also alleviate stress between cats.

Sometimes cat fights aren’t what they seem. If cats appear to be aggressive, but are not making any sounds, it’s safe to assume they are simply playing. However, if you hear threatening growls or hissing, there is reason to intervene.

Cats returning from the vet may bring in scents from the clinic that make them smell unrecognizable to their feline friends at home. This is a phenomenon known as feline non-recognition aggression. When returning home, place the cat which may have picked up new odors in another room, as if you are introducing cats who have never made contact before. Try pheromones, like Feliway, to reduce tension or use a towel to pet the cats that stayed home, particularly rubbing the cheek area. Then rub the towel all over the vet-visit cat to deposit a communal family scent. Always make sure re-introduction is gradual. Encourage your cat to use a scratching post instead of furniture by rewarding her/him with praise and treats.

Inappropriate scratching is one of the most frustrating cat behavioral issues.

To direct cats to scratching posts instead of furniture, place a scratching post in front of the object they tend to scratch and sprinkle or spray catnip onto it to entice scratching on an appropriate surface. The scratching post should be tall enough for a stretch, as well as sturdy. Simultaneously make the object your cat was previously scratching an uncomfortable place to scratch. Placing tinfoil, double-sided sticky tape, sandpaper or plastic on a couch or chair, for example, will discourage a cat due to the noise and texture.

Also, further encourage the cat to paw at the post by dangling a toy. Always reward your cat with praise and treats for scratching on the post. Be sure to clip your cat’s nails regularly. If none of the aforementioned tactics seem to work, consider putting plastic caps on your cat’s claws that attach with an adhesive and prevent destruction. This method is temporary, however, as the caps will need to be replaced every 4-6 weeks.

When cats mark using urine, they are signifying where the boundaries of their territory are. Both male and female cats may spray when they feel anxious or threatened.

Neutering male cats does not always change their behavior, but is encouraged to help prevent it. Typically, there’s a perceived territorial threat that prompts spraying. Some detective work will need to be done to determine the cause that prompted it.

The presence of stray cats in your neighborhood may cause your cat to mark near windows and doors. New pets in the home or a conflict between existing pets can also make your cat feel a need to mark his territory, as well as changes in the environment, such as moving.

Enzymatic cleaners should be used to eliminate any odors that can cause a cat to soil an area where he previously sprayed.

You can also change your cat’s association with his favorite marking area by doing other activities that your cat associates as being enjoyable in this space, such as petting or feeding.

If your cat continues to mark, bite or scratch, contact your veterinarian to learn how you can employ both medical and behavioral training to help further.